Mark Cuban continues to remind Mavericks faithful that he’s capable of screwing anything up.  The decision to give Dirk Nowitzki a statue was as big of a no brainer as picking Desmond Bane or Saddiq Bey two years ago, but as usual, he blew both of those moves.  This statue makes Ronaldo’s bust look like a masterpiece and deserves a thorough examination. 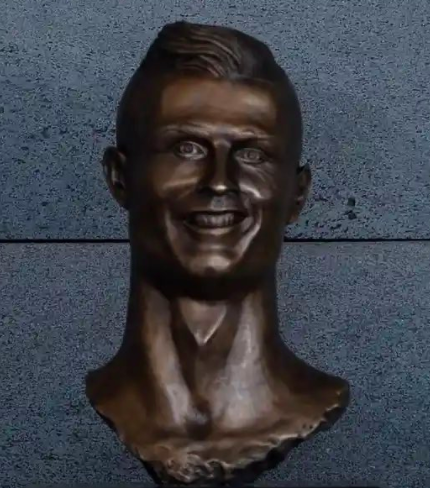 A quality piece of art asks its viewer to do at least a little thinking as he surveys the work, but Cuban apparently thinks we need some clarity on where Dirk’s patented shot is headed. The move is legendary! We don’t need to be spoonfed what happens next.  But hey, at least we know it’s not a one-legged skip pass now.  A statue shouldn’t attempt to be animated.  We might as well put up a Dirk hologram out in front of the AAC at this rate.

Way too helmety. Personally, I would have preferred Dirk’s flow from the mid 2000s, but this version of our German king’s doo is much closer to a Wayne Newton homage than Dirk’s best looks.

I guess the weird platform situation is meant to show Dirk being in the air? And I guess suspending someone midair within a statue is a tall task, but Dirk’s left leg is way too straight and flaccid for a leg that’s pushing off of the ground.  And not to mention, we don’t get his patented hard lean back either. His back is as stiff as a board here and doesn’t capture the powerful bend he used to create such space.

This is an insult and affront to Dirk’s legs. They are chicken-esque and have next to zero definition in them.  Also, where the hell is his neck?!?

I’ll give Mark credit for choosing the right pose for Dirk’s statue (not like it was a difficult decision though). The one-legged fadeaway belongs to Dirk in a way few players have owned a particular move.  But it is fun to consider other possible moments.  My favorite alternatives would be:

(Yes, I intentionally misspell his name every chance I get. And can you imagine a statue of Wade lying on the ground outside the AAC?!?)

Let us know any others we missed.  And let The Cubes know how you really feel about the statue so he can get it right before the real thing goes up.

One day a group of friends got together and began debating. When looking for fodder for their debates, which ranged widely in subject matter, they decided that there weren’t enough high-quality blog sites that covered the sheer number of different topics they wished to debate. These friends, being opinionated and worldly, decided to take their debates to the Internet, and here we are.

For questions, comments or concerns, or if you want to inquire how to contribute to the blog, email us at webmaster@cosastotum.com.

Please bear in mind that these opinionated, worldly friends all have full time jobs, so reply times may vary.